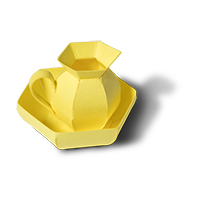 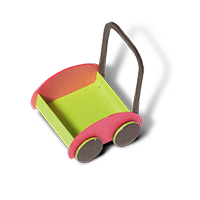 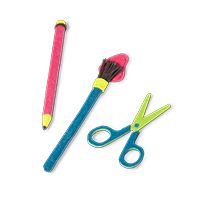 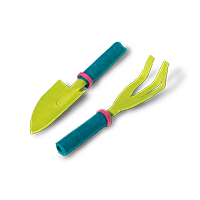 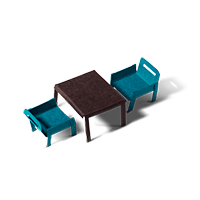 Montessori is a teaching method that stimulates autonomy, practical learning and senses of community. Widespread in the world, it was developed by the Italian physician and educator Dr. Maria Montessori in the early 20th century and applied for more than a century in children of all origins and cultures everywhere. After years of scientific research, Dr. Montessori concluded that children with freedom of choice show greater interest in learning, are more motivated, have more discipline and autonomy, evolving faster than children under traditional teaching methods. There are tens of thousands of Montessori schools in the world. In the United States alone there are more than 8,000.

Main pillars of the Montessori Method:
Seriously implemented, Inciting the desire to learn. 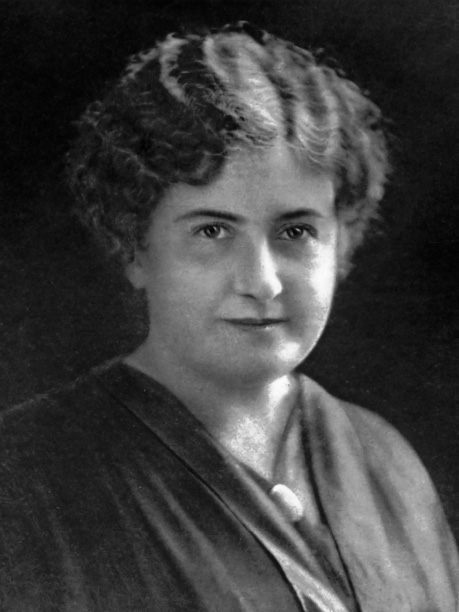 “Free the child’s potential, and you will transform him into the world”

“Free the child’s potential, and you will transform him into the world”

Main pillars of the Montessori Method:
Seriously implemented, Inciting the desire to learn.

Our educators are trained or being trained in the Montessori method. They are prepared to guide the activities respecting the pace and freedom of choice of each child. As prepared adults, the educators know when and how to intervene so as not to generate ruptures in concentration. The primary role of the educator is to observe each student in order to strengthen interests and present new challenges. The educator shows children a world full of discoveries, allowing them to explore spontaneously.

Each of our spaces is designed for the child. The arrangement and the height of the furniture make it possible for the materials to be always within reach of the students, allowing autonomy of exploration. We use neutral colors, providing a sense of tranquility for the child to focus on the activity he or she is working on. In mixed-age rooms, older children share their knowledge with younger ones, learn to teach and lead group work. They become models and like to play that role. The younger ones reflect their behavior and strive to accompany their peers, anticipating activities and challenges that await them in the near future. The bond developed between children of different ages teaches the two groups a lot, in a dynamic of cooperation and mutual respect promoting socio-emotional growth.

Our materials allow the development of the scientist that exists in each child: experimentation, hypothesis testing, confirmation, repetition. All materials are designed to develop some specific skill, whether linguistic, mathematical, sensorial, motor or cognitive. The child is free to work with the materials they are most interested in, as long as the rules of the environment are respected. It is up to the educator to guide the students and present each activity in order to arouse interest in the various areas of knowledge.

“Maria Montessori was a scientist before being an educator, and her main interest was to understand children, not to shape them.” (Gabriel Salomão)

It is important for the child to have a calm environment that favors concentration, sense of order, options of work and exploration. The child likes to act by choices, is naturally cheerful and has an extremely absorbing mind. 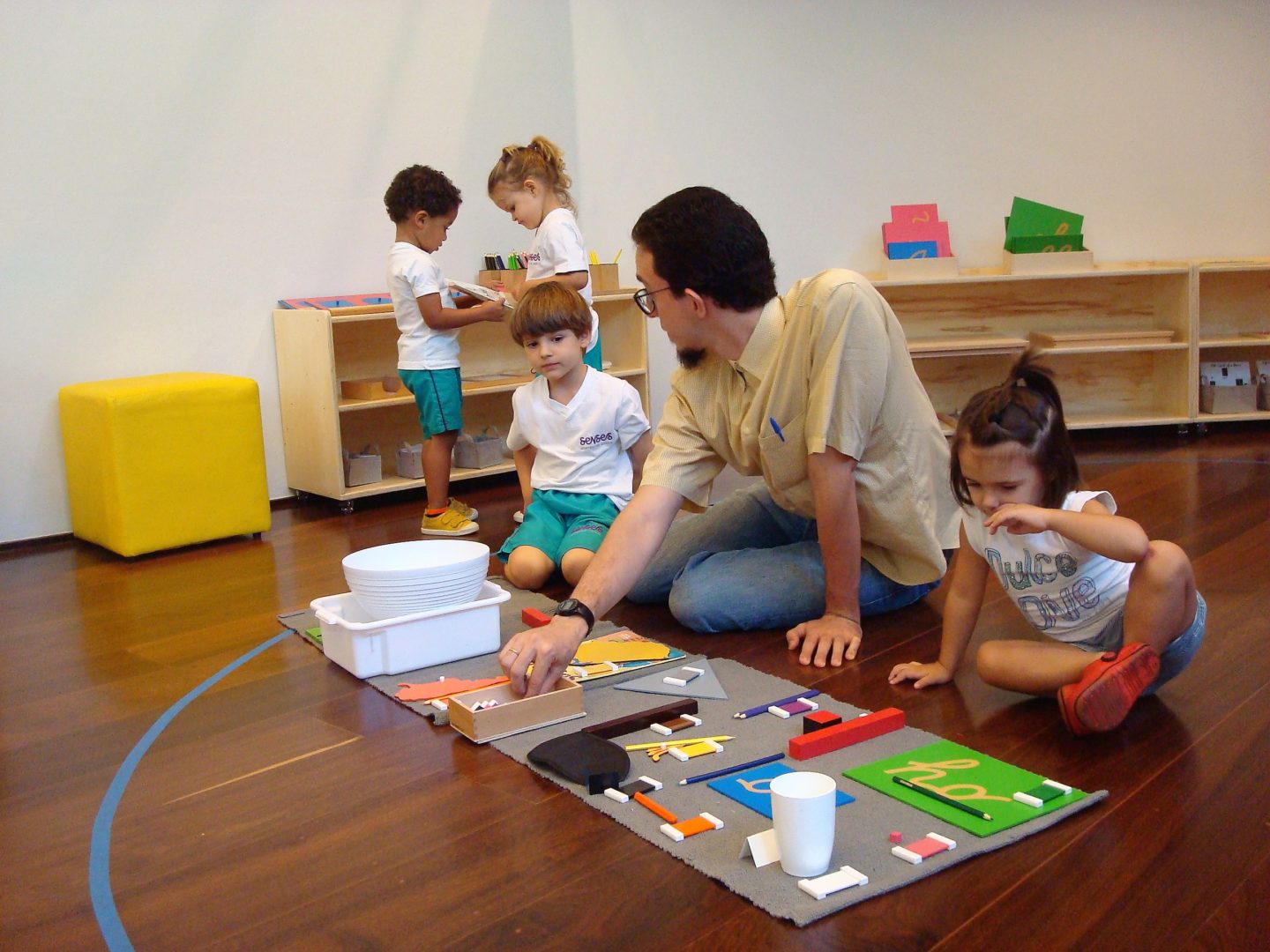 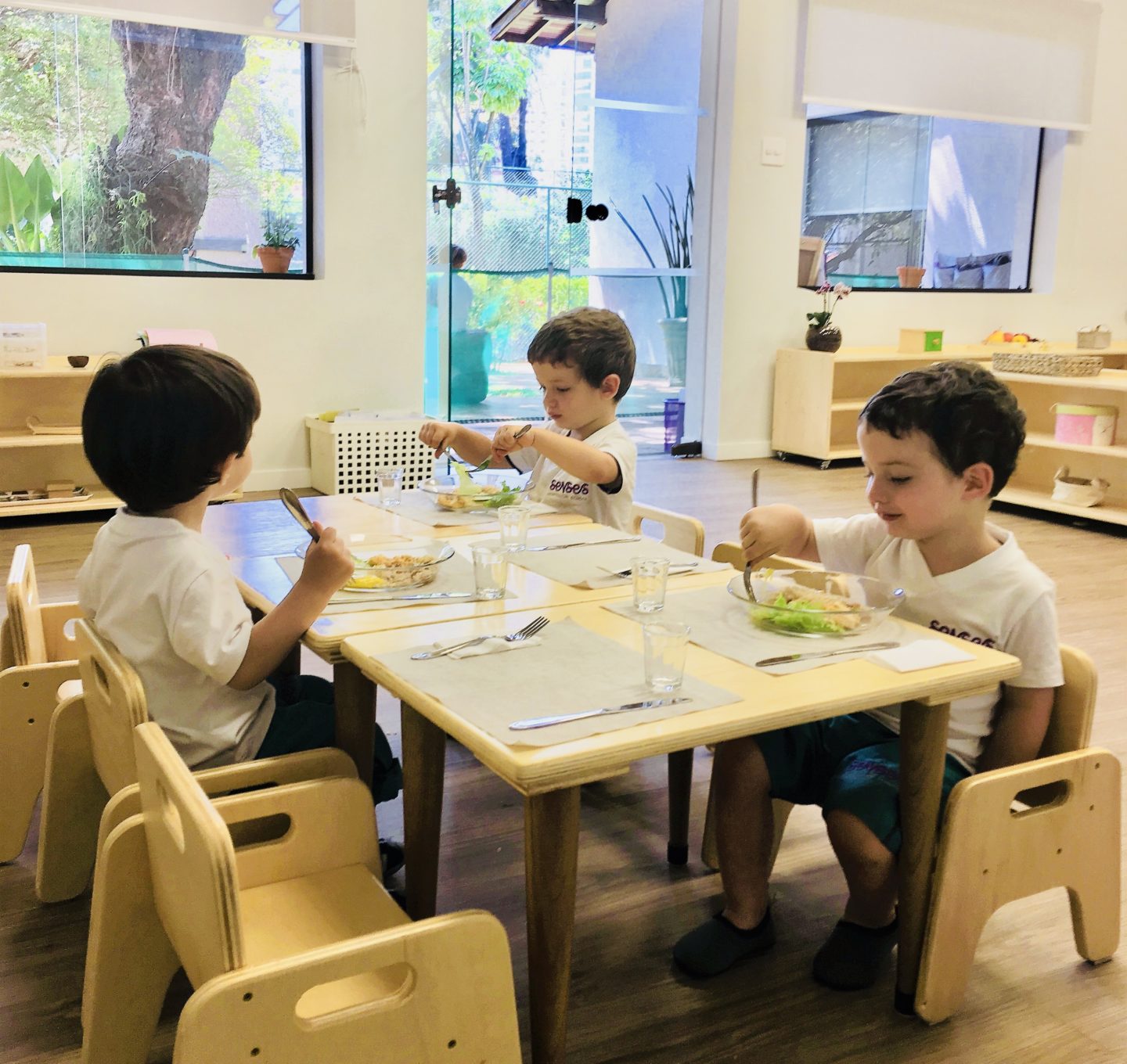 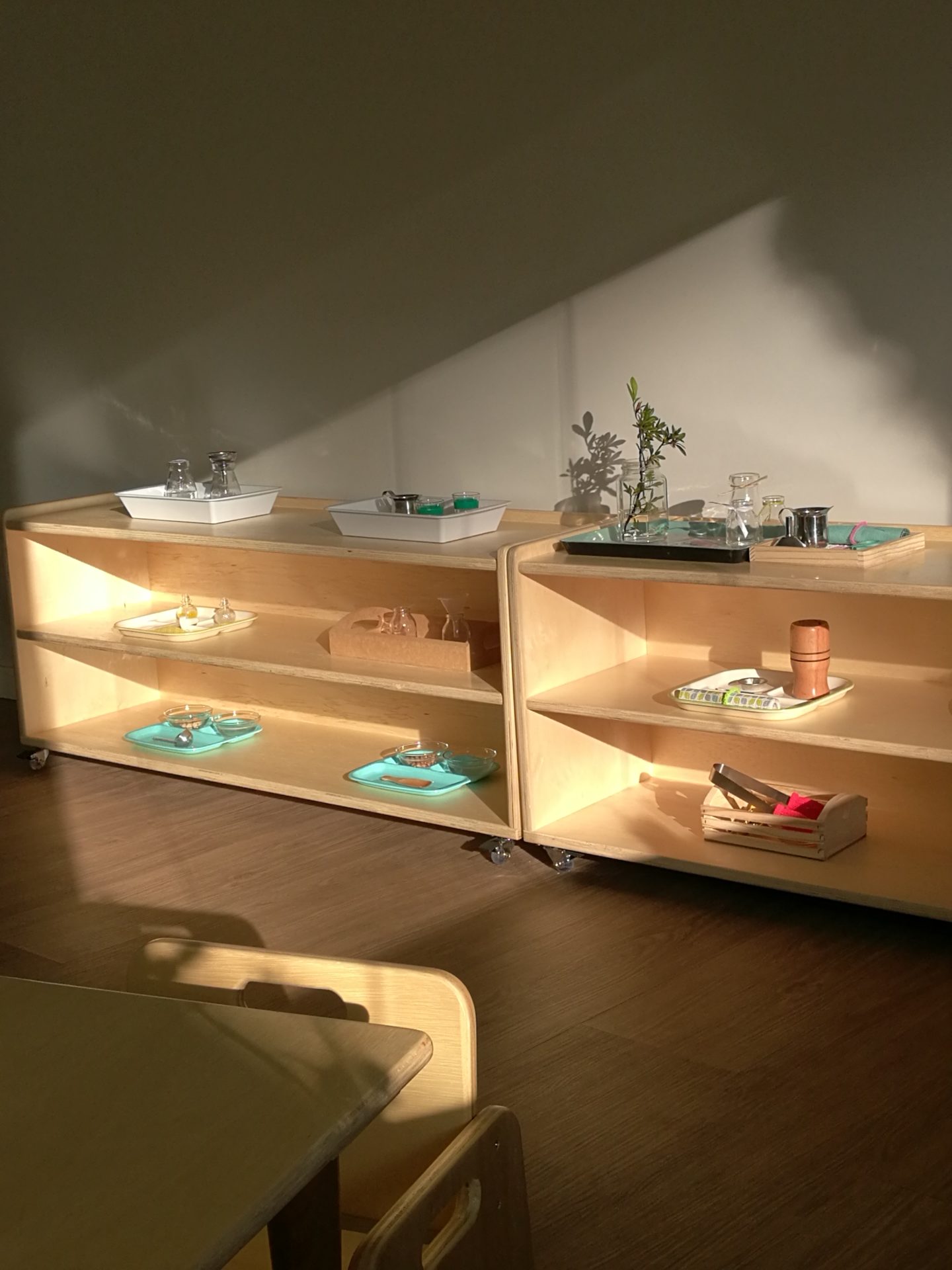 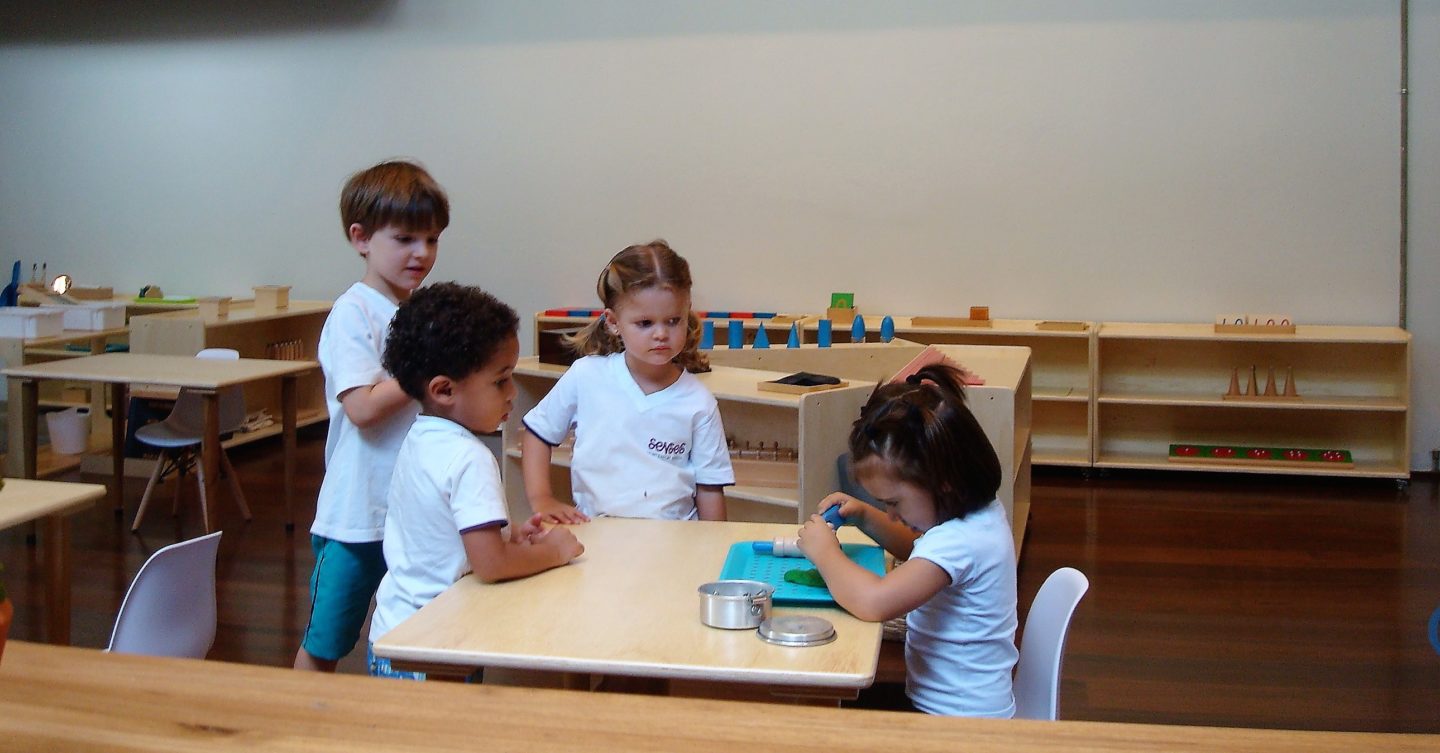 Early childhood is the most important period in human development, due to the rapid changes that occur in the brain during this period. Up to its sixth year, the mind is particularly receptive, so that its neurological system is transformed as each new experience is lived.

The brain is more flexible – or ductile – in the early years of life just to be able to assimilate and accommodate a wide variety of information and interactions. As we grow, the brain matures to become more specialized and fit for more complex functions. As it happens, the brain alters its ability to reorganize and adapt rapidly. At the end of the first year of life, neurological areas that play a role in differentiating sounds already begin to specialize in the language to which the child has been exposed since birth, so we begin to lose the ability to recognize different sounds and phonemes from other languages. Although the “window” of language remains open, the neurological circuits become increasingly solid and stiff. 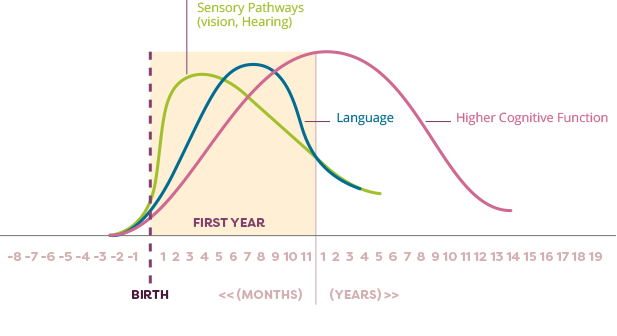 In the proliferation and pruning process, simpler neural connections form first, followed by more complex circuits. The timing is genetic, but early experiences determine whether the circuits are strong or weak.

The brain of a child can, therefore, be compared to a sponge that absorbs all the information to which it is exposed, restructuring itself with each new experience. The better the learning conditions in this period, the better the child’s chances of reaching the best of their potential becoming a more balanced, productive, and fulfilled adult.

Language is an ongoing experience in our lives: a sophisticated mechanism that involves different areas of the brain and affects not only our communication with others, but also how we interact with the world and perceive ourselves. Learning a second language enhances the ability to focus, cognition and sense processing, which results in neural networks with greater learning ability.

“Bilingual children, besides not mixing up the two

languages ​​they have learned, tend to focus more on

tasks and to develop better attention than their

“The effects of bilingualism on toddlers’ executive functioning”

At Senses, bilingualism is taken seriously since the nursery, where babies are already exposed to music and words in English, absorbing sounds and phonemes of the language. Once in the Junior Scientist room and in the Senior Scientist room, children enter the language immersion program (after an adaptation period). Our educators are fluent in English and encourage children to use this language in school so they learn effortlessly and naturally.

Contact with nature is fundamental to a full development. Therefore, in our 600m2 (nearly 6,500 sq.ft) of greenery we encourage and value the interaction with the environment. Our students can learn about various plant species and the animals that depend on them for survival, such as birds and insects. We have in our gardens native species of great beauty – such as the heliconia, or banana of the bush, the manacá de cheiro, the golden rain orchid and the jabuticabeira –that stimulate the child in a sensorial fashion, besides offering the opportunity to taste a fruit picked directly from the tree.

“Let the children be free; encourage them; let them run outside when it is raining; let them remove their shoes when they find a puddle of water; and, when the grass of the meadows is damp with dew, let them run on it and trample it with their bare feet; let them rest peacefully when a tree invites them to sleep beneath its shade; let them shout and laugh when the sun wakes them in the morning as it wakes every living creature that divides its day between waking and sleeping. “ 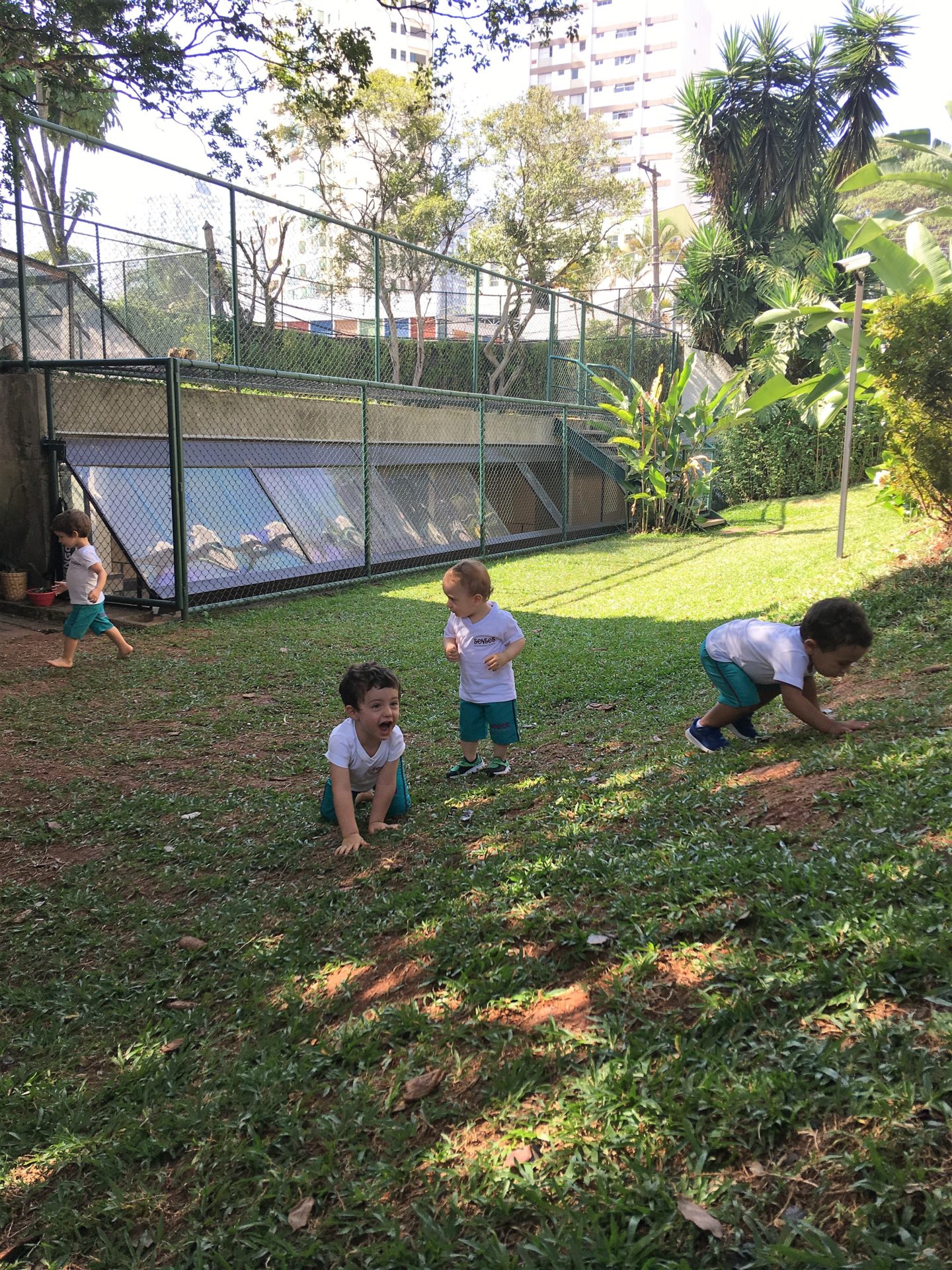 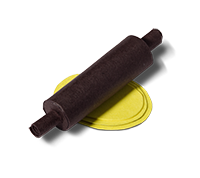